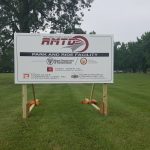 Information in this article was published on:
June 28th, 2018 by Jeffrey Drake

The location at 2315 W. Main St. is near the grounds of the Veterans Affairs medical clinic and will allow easier access for passengers using public transportation from across southern Illinois.

"It will expand the availability and identification of the services that rural transit and certainly Rides Mass Transit provides for the citizens of the area," said RMTD CEO Bill Jung "We want to make it more efficient and easier to use, and that's really what this transfer center is going to be all about."

Several amenities will include a passenger terminal with climate-controlled waiting areas displaying real-time bus information along with covered bus slips.

The location will also be a hub that allows residents to identify and gain access to the rural destinations and resources that are available.

"It will offer increased efficiency in the urban bus system, but it will also be a point where all of the rural systems, Shawnee Mass Transit, South Central Transit and RMTD come together to make it more meaningful to the citizens while giving them even more access to a very robust inter-city bus schedule that will take them to places like St. Louis, Carbondale, Evansville, Ind., Paducah, Ky. and Mount Vernon," said Jung.

Several members of the community were on-hand for the groundbreaking along with area legislators and their staff.

"We would like to thank all of the people who helped make the project possible including the Delta Regional Authority, our federal delegation, state legislators, along with the State of Illinois and Department of Transportation," said Jung.

Expected completion for the project is early 2019. More information can be found by visiting our website.

This site uses Akismet to reduce spam. Learn how your comment data is processed.

Request for Proposals – IT Infrastructure

RMTD will provide affordable, safe and accessible public transportation for all residents of the communities served by promoting independence, self-sufficiency and economic opportunity.